Color by structure is a widely known phenomena and can be found in the bright iridescent colors of opals and butterfly wings. This bright color derives from a strict and well-defined undulation of the refractive index of a given material. Several synthetic approaches have been undertaken over the past decades to mimic this intriguing coloration mechanism. 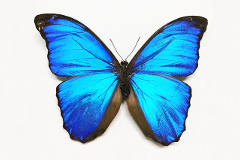 Colloidal crystals are a particularly suitable class of materials to realize such structural colors across the entire (visible) spectral range. Quite simply, monodisperse latex particles of the right size self-assemble into such highly ordered three-dimensional systems. Consequently they are often termed photonic crystals. Besides to their aesthetic beauty, colloidal crystals have been investigated for their application as sensors or waveguides, to name a few. When using colloidal particles, which are smaller than the wavelength of light, any incoming electromagnetic radiation will experience only an effect refractive index medium.

We specifically used this property to provide simple access to antireflective coatings based on a single layer (so-called colloidal monolayer) of sub 200 nm polystyrene particles on a glass substrate. Such non-close packed colloidal monolayers can be used in a vast range of nanostructured substrate-immobilized materials via colloidal lithography. This allows access to plasmonic nano-arrays.

Interestingly colloidal crystals also possesses an undulation in density contrast on the length scale of a few 100 nm. Therefore, colloidal crystals can also interact with mechanical (acoustic) waves in the hypersound regime in the same fashion as photonic crystals do with electromagnetic excitation. Consequently, these colloidal superstructures are termed phononic crystals. Combining both properties in a single materials gives rise to the term phoXonics, where X can be an "t" or "n". In a cooperative work, we have been able to assess a range of interesting phononic properties, where we were able to identify two types of bandgaps in a liquid infiltrated phononic crystal: one can be assigned to the crystalline structure and order, the other can be assigned to the vibrational Eigenfrequency of the constituting latex particles.  Such Eigenmodes can be further fine-tuned by the morphological design of the colloidal particle.

An optical analogy to the vibrational Eigenmodes of latex particles is given by optical Mie scattering of particles with a size, which becomes commensurate with visible light. We were able to show that this resonance position can be adjusted by the size of the colloidal objects. It is even possible to perceive these pale and largely angle-independent colors with the bare eye. This is made possible by synthesizing hollow silica spheres. Such hollow objects allow for a dramatic increase of the mean free path of light, travelling through completely amorphous and non-ordered powders.